Finalists for the Costume Designer Guild Awards sound off on signature designs from their nominated works in television, from the White Queen in 'The Queen's Gambit' to Queen Charlotte on 'Bridgerton'.

10 talents nominated across multiple TV categories by the Costume Designers Guild talk about inspiration, character, their greatest challenges and when to color outside the lines. The winners will be announced virtually during the organization’s 23rd annual awards ceremony April 13, streaming live on Twitter.

What’s one look from your nominated work that has received a lot of attention and what’s the story behind that look? 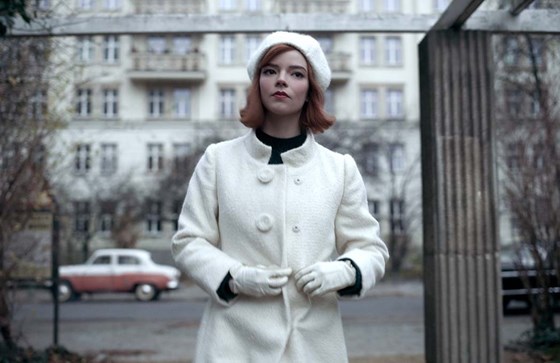 Anya Taylor-Joy in The Queen's Gambit

Definitely ‘The White Queen’ costume at the end. It is a full white look, head-to-toe, that resembles the white chess queen piece. I had this idea when I saw the location and the cubic pattern of the rose trellis she walks through. I was thinking that it was like walking into the inner body of a chessboard. I wanted it to symbolize that it was obvious Beth (Anya Taylor-Joy) had to be the strongest female figure on the board. 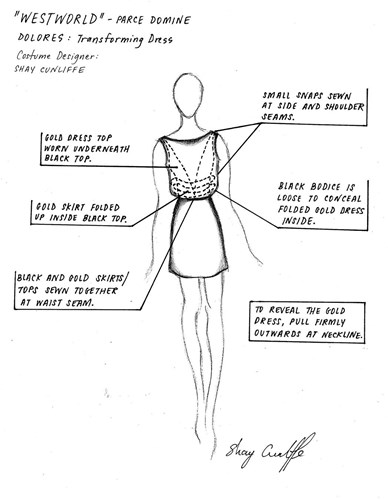 Dolores’s (Evan Rachel Wood) short black cocktail dress transforming into a gold lamé gown with one quick pull at the neckline. It has received a crazy amount of attention! I began costume designing for the theatre, where transformations in real time are often a classic feature of a performance. So, this dress really took me back to an early part of my love of costuming. 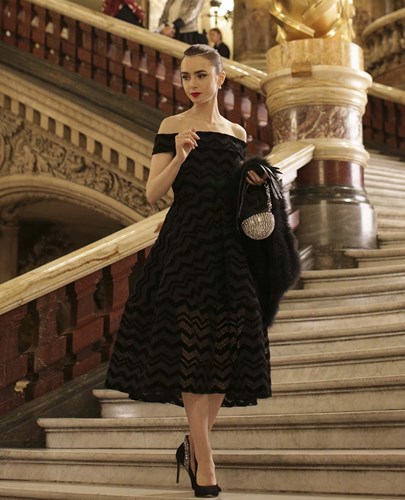 I made an homage to Audrey Hepburn through Lily Collins, who is her facial doppelganger. I dressed her in a Christian Siriano off-the-shoulder dress, which seemed to get a lot of attention. 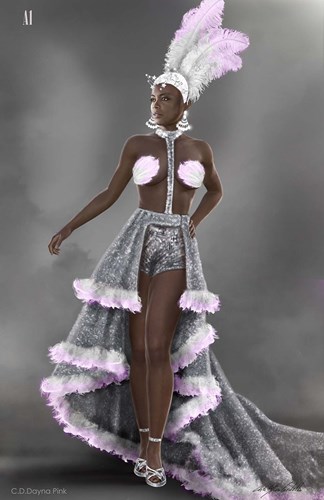 Sketch by Christian Cordella for a costume by Dayna Pink for Lovecraft Country.

Dayna Pink, Lovecraft Country: “I Am” (Excellence in Period Television)

I think Hippolyta (Aunjanue Ellis) as a dancer in Paris on stage with Josephine Baker was probably the most show-stopping. Seeing her dancing in only feathers and rhinestones was quite a juxtaposition to the 1950s housewife Hippolyta we came to know in our show. We made those costumes feather-by-feather in our own costume department, which ended with a crew of exhausted stitchers and costumers, endless rhinestones covering my office, and a magical moment with the amazing Aunjanue Ellis transformed before our eyes! 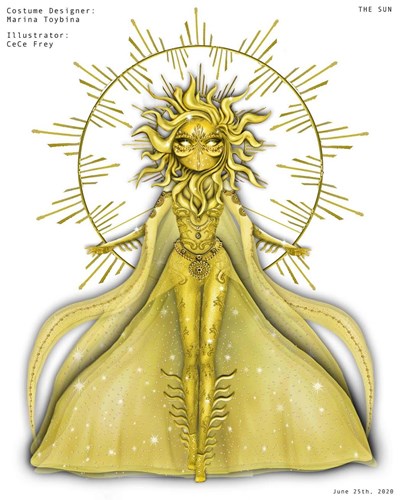 Sketch by illustrator CeCe Frey of costume designer Marina Toybina’s design for The Sun on The Masked Singer .

If I had to pick one, it would be 'The Sun’ costume. The inspiration came as a beautiful collaboration between LeAnn Rimes and it brought me to design a costume that would exude balance between life, light, beauty and strength. The design itself is very rich in choice of textile, gold being the main color variant and it had to be the perfect gold. Multiple draping techniques were used to construct the outer shell and the base of the costume. Once all the sewing and fabricated elements were constructed, the costume was then embellished and hand-beaded. It showcased our couture, handcrafted technique, yet still have that Masked Singer touch with its beautiful, hand-sculpted mask by Eric Haskell. 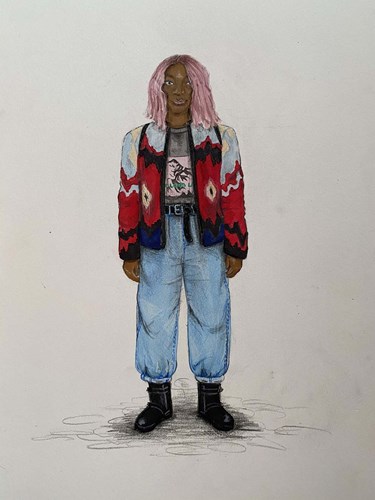 Lynsey Moore, I May Destroy You: “Social Media is a Great Way to Connect” (Excellence in Contemporary Television)

Arabella (Michaela Coel)'s iconic fur coat and high-waisted jeans. I wanted Arabella to have her own style that the audience would come to associate with her. Michaela suggested high-waisted ’90s jeans, like those worn by TLC, and that became the starting point. I knew that her jacket was the most important part of her costume design and that it would inform the rest of her look. I found images of various vintage jacket shapes and faux fur coats as part of my research, but felt that I'd know the right jacket as soon as I saw it.  And that's exactly what happened. Trawling through TK Maxx, it appeared and I knew I'd found it. From that point I could clearly see Arabella in my mind and got to work on the rest of her wardrobe.

This would be the broad concept taken in layering sheer transparent pastel fabrics over the women’s silhouettes. Inspiration from the painter Genieve Figgis, who captures her subjects with a diffused softened line, led us to capture our inspired Regency silhouette, like a box of fresh macaroons. 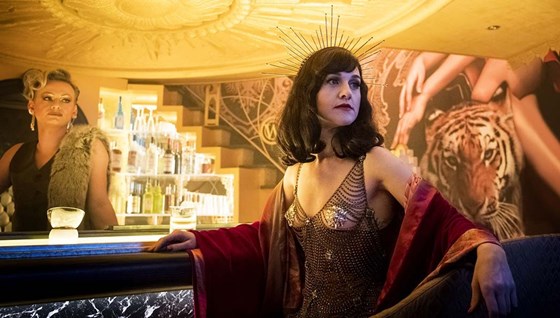 The first time we meet Miss Audrey (played by Lena Hall), the proprietress of the Night Car, she is wearing a show-stopping, flapper-inspired ‘dress’ made entirely of Swarovski encrusted chains by jeweler Miranda Konstantinidou. It’s a gorgeous piece but was so heavy (somewhere around 35 lbs) that in-between scenes, we had to put foam pads under the shoulder straps. I believe it really set the tone for Miss Audrey’s costume journey! 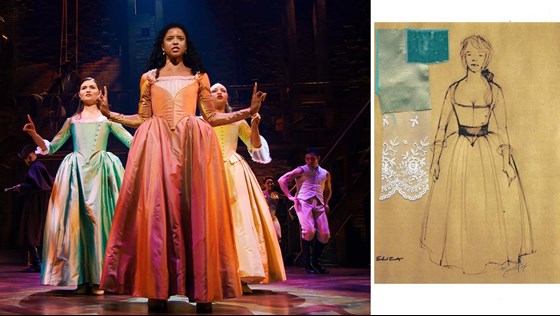 The Schuyler sisters, played by (from left), Phillipa Soo, Renée Elise Goldsberry and Jasmine Cephas Jones, in Hamilton; Sketch by costume designer Paul Tazewell for the character of Eliza in Hamilton.

We have a lot of people who have tried to remake the Schuyler Sisters dresses. Although there have been some decent interpretations, the color often tends to be a little off. All in all, it’s a wonderful compliment. 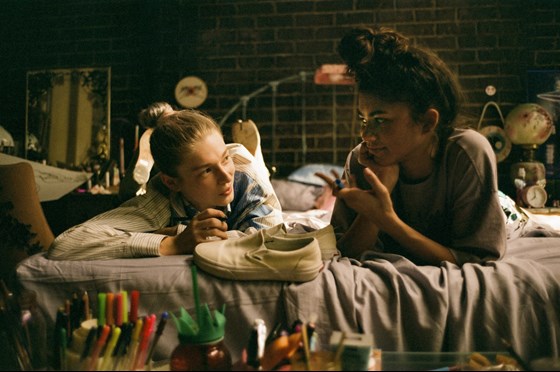 The New York apartment scenes with Rue (Zendaya) and Jules (Hunter Schafer) in that episode, which was the only one that aired in 2020 due to the COVID-19 pandemic, give us a window into the fantasy of Rue and Jules living together in NYC after they have graduated from high school. Jules’s look represents a more mature version of her in an oversize collared shirt and black pants with cream piping details throughout.

What is the costume that you can’t believe you pulled off? 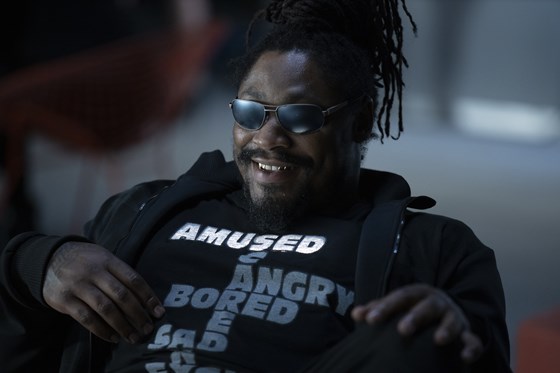 Cunliffe, Westworld: Giggle (Marshawn Lynch)’s ‘mood’ tee shirt!  We were just chatting about the idea of a shirt lighting up according to changing moods. I threw out the thought that it might be cool if the mood words intersected like a crossword puzzle for more visual fun. And suddenly it was game on — figuring out how to graphically design this and make it work.

Field, Emily in Paris: The one that I surprised myself in pulling it off was a combination of a patchwork Dope Tavio dress (from my ARTFashion Gallery), which I recut to fit her, and paired it with a Chanel jacket.

Binder, Queen’s Gambit: The red Paris dress was most challenging. It had to look gorgeous and show her in all her beauty when she meets her friend in the bar the next day.

Toybina, Masked Singer: In season four, the ‘Baby Alien’ costume. By elevating the costumes for the show, we decided to build our very first hand-puppet character. Not only did I have to learn the ins-and-outs of hand puppetry, but the real trick was: How do we make this relevant to our show and still create a wearable costume?

Moore, I May Destroy You: Arabella's Halloween costume — described as a 'dark angel,' which could be interpreted in many ways. The Halloween episode marks a pivotal point in Arabella's journey; she feels empowered and believes she's a good force taking down the perpetrators of the world and this is represented by the angel part of her costume: the wings and tutu skirt. In reality, she is delusional and has reached a dark place in her journey and this is represented by the demonic wings, horns and barbed wire. 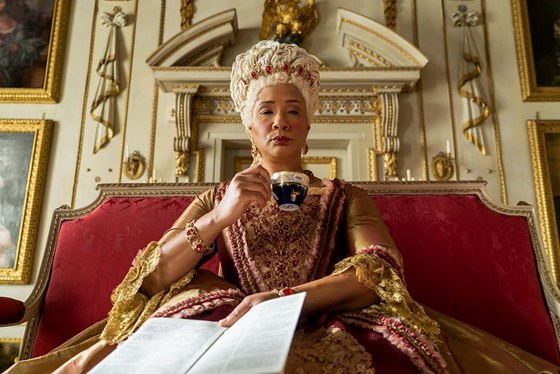 Mirojnick, Bridgerton: The entire wardrobe for Queen Charlotte. This character’s challenge was time. Being the only character not inspired by the Regency period took her gowns out of our production line and into a separate team of makers and time schedule. Her never-ending underpinnings, meters of fabric, hand embroidery, jewels and wigs — these will remain a tribute to collaboration of time management from all departments involved with her design.

Summers, Snowpiercer: Without a doubt the Breach Suit. This is the airtight, heated almost “moon suit” that characters wear whenever they have to deal with the extreme cold exterior of the train (–120 degrees celsius). We had a limited budget, and the entire suit, helmet, backpack and all was made in-house.

Tazewell, Hamilton: Creating a ‘modular’ and neutral set of costumes for the ensemble that would still allow for being specific to each character. 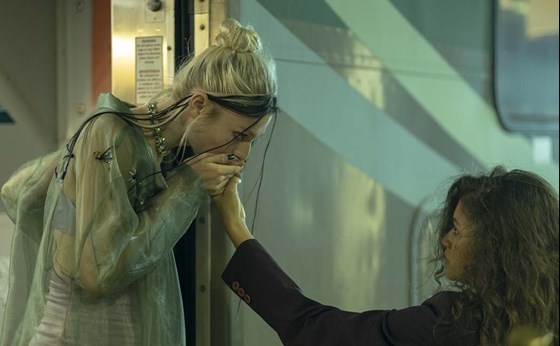 Hunter Schafer and Zendaya in Euphoria.

Bivens, Euphoria: The winter formal looks for the girls was a fun challenge, as I wanted them all to stay true to their character’s individual style, but also all look great together on camera. I love designing for an ensemble and considering the whole frame.

Since there are no boundaries for fantasy, at what point do you determine when you're going over the top?

Cunliffe, Westworld: Westworld is grounded in very real characters and emotions despite its fantasy aspects. It felt important not to go over the top at all with the look, but keep things very ‘real’ within the world we created.

Summers, Snowpiercer: The characters had to work within limited pieces … basically whatever they brought on the train. So repurposing pieces in their closets begat multiple looks out of sameness, which created a fine line between fashion and fantasy. The danger here is crossing the line of believability and becoming ‘clownish,’ which I think demystifies the fantasy.

When is it appropriate to depart from period-specific looks in the name of a character?

Mirojnick, Bridgerton: In most cases this would be a difficult decision to make, if the project was historically accurate. Bridgerton was an inspired-by-the-period piece. This allowed us to dance around historical accuracies and redefine history to benefit the character and the story with little fear.

Pink, Lovecraft Country: When we needed to use modern fabrics and conversely travel backwards for a character, the fantasy component of this show allowed us to do that without taking you out of the moment. Some examples of those are Leti (Jurnee Smollett's) equestrian blouse and Ruby’s (Wunmi Mosaku) sequined dress. Both of those pieces might have existed in that time but not in that way. As a designer, you put yourself in the period and come up with something using the inspiration of the time and your own unique perspective.

Binder, Queen’s Gambit: If I work on a period movie, I never depict the entirety of that time period. Instead, I choose a section of reality that serves the story and seems interesting for today's audiences. If I work in a certain period, in the process, I get a very intense feeling of what is right or wrong from the point of view of our characters and what they would choose and I follow that instinct.

Tazewell, Hamilton: That question always depends on the specific point of view of the director and the style of the production overall. If anachronistic style is a compelling way to tell the specific story, then it is definitely appropriate.