"New York has a lot of dreamers," says Katy Keene, the titular character, in voiceover that opens The CW's newest show. It sets the scene for the aspirational storyline — and the style.

In this "Riverdale" spin-off, the starry-eyed strivers include department store employee by day (and fashion designer by night) Katy (Lucy Hale) and her fam: New York It Girl, by way of somewhere in the U.K., Pepper (Julia Chan); wannabe Broadway performer Jorge (Jonny Beauchamp); Riverdale transplant and singer Josie (Ashleigh Murray). New York City, where the series is set and films — most recently by the Fashionista offices, BTW — plays a fifth lead role, supported by its eclectic, expressive and always fun fashion.

The throwback, sort of mid-century-but-with-smartphones vibe of "Katy Keene" also takes us back to the golden days of yore when luxury department stores thrived — namely, the illustrious Lacy's, where Katy's fashion ambitions are crushed and lifted on a daily basis. (The famed Bergdorf Goodman stands in for the Lacy's Fifth Avenue and 58th Street exterior shots.) But the grand mid-century interior, filled with chandeliers and perfume bottle-lined counters straight out of "Carol" (actually: a sound stage at Silvercup Studios in Long Island City, Queens), exemplifies the overall "timeless" aesthetic of the show. 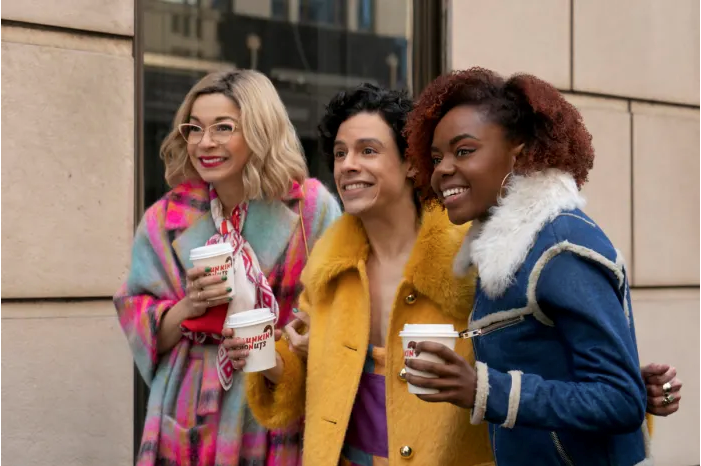 Appropriately, the costume designers of "Katy Keene" boast some major New York City (and fashion) clout: Liz Vastola, who establishes the characters in the pilot, and Jenn Rogien, who takes the characters on their journeys for the full season. Rogien recently won an Emmy for depicting a specific and very cool East Village slice of N.Y.C. in Netflix's "Russian Doll;" she also costume designed six seasons of the millennial "Sex and the City," "Girls." Meanwhile, born and bred New Yorker Vastola put her touch on the non-yuppified version of Hell's Kitchen in "Jessica Jones" and "Daredevil," plus '90s-era Manhattan in the Jenny Slate-starring movie "Landline."

Taking direct inspiration from the pop art-y theme from the story's Archie Comics origin, the two applied their proven New York resourcefulness, experience and creativity to costume designing "Katy Keene" — but with their own contemporary twists.

"We've been looking at a lot of Dior at the height of the New Look-era, Balenciaga in the '50s and '60s and contextualizing that with contemporary McQueen, Monse and Area and really making it a fashion mash-up for inspiration," says Rogien. (In terms of fashion cred, script-wise, the premiere episode references "Chanel, Givenchy, Celine, Yeezy and Dom" — all in one sentence.)

Behind the scenes, Vastola and Rogien showed their support for the New York City fashion industry. "There's no store in the world like Bergdorf Goodman, the Bloomingdale's flagship or the Saks Fifth Avenue flagship," says Rogien, who also enjoyed the opening of Neiman Marcus at Hudson Yards and the new Nordstrom for more options. "We were in the Garment District for every episode. That is an area where New York is truly unmatched," she adds about her regular visits to fabric, trimming and, of course, feather suppliers.

Below, Rogien and Vastola take us through the fashion of "Katy Keene," giving us a preview of how the lead characters' fashion helps chart their journeys. 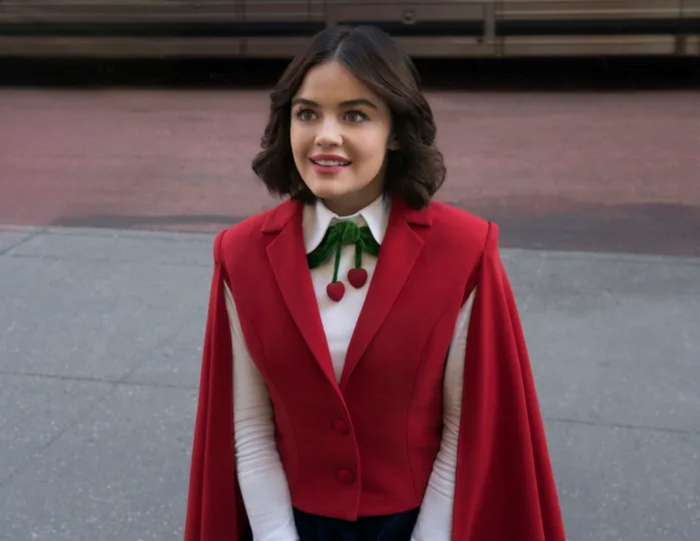 In the first episode, Katy (Lucy Hale) dresses for the job she wants.

Throughout the season, the main inspiration for Katy's bold palette, '50s nipped-waist and flared skirts and poppy-heart and cherry graphics come straight from her comic origins. The native New Yorker — Lower East Side, TYVM— opens the series in an "I heart K.O." T-shirt, an ode to her bouncer boyfriend (Zane Holtz, straight out of The CW K.J. Apa/Charles Melton incubator).

As an eager assistant to Gloria Grandbilt ("world class personal shopper to the rich, fabulous and entitled"), Katy dresses to impress for her day at Lacy's in an adorable Peter Pan-collared shirt, accented with her signature cherry motif at the neck, a navy A-line skirt and a bold red cape-blazer — all custom-designed (and pictured above). "It was like her own little heroine moment with this nod to a superhero cape, but then make it fashion," laughs Vastola.

"She's very chic and she loves to play with fashion, but she has a very anti-New York girl color palette," says Rogien of Katy's penchant for pink and red. The costume designer continued "mining" the comics throughout the season, as the titular character juggles K.O. (and his boxing career ambitions), adventures with her friends and her fashion goals, both at Lacy's and through her own custom creations — ghost-designed by Rogien, who also went a bit method.

"We actually did a design board for Katy," says the Rogien, who both shopped contemporary pieces and custom-built others for the show. "[We created what] Katy's fashion line inspiration board would look like." 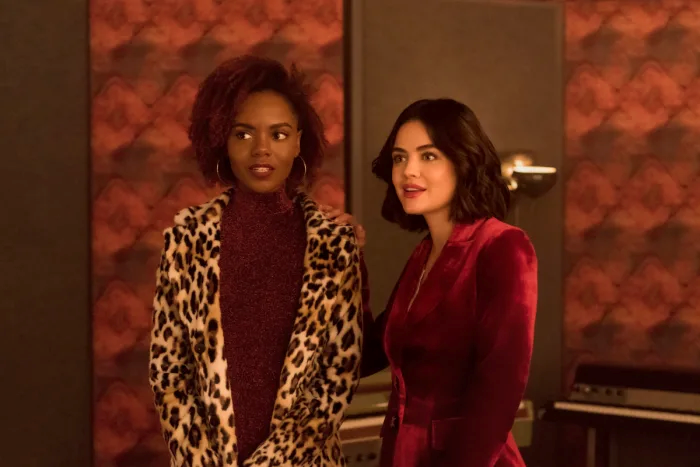 Josie in an H&M coat and Katy in a custom pantsuit in the pilot.

Introduced to Katy via former New Yorker and mutual friend Veronica Lodge, Josie moves into Katy's Washington Heights apartment to try and make it in the music biz. "Josie's look might actually be the biggest evolution," explains Rogien about picking up the character five years after she was introduced in "Riverdale."

For the pilot, Vastola transitions Josie from Riverdale (or "the murder capital of the world" as she fairly accurately describes her hometown), with an "earthier, a little downtown and a little grittier" '70s aesthetic. Vastola scoured local vintage shops for most of Josie's wardrobe and sprinkled in body-con Solace London tops, over-the-knee boots by Stuart Weitzman and Joie and a faux-fur leopard coat by H&M (above). As Josie begins to break through, she starts dressing the part.

"We definitely infused some rock 'n' roll, but not in a 'old school shredded T-shirt, ripped jeans type of way,'" hints Rogien, who evolved Josie's wardrobe into mainly contemporary pieces. "It's very fashion-forward and our own take on rock 'n' roll-meet-Josie." 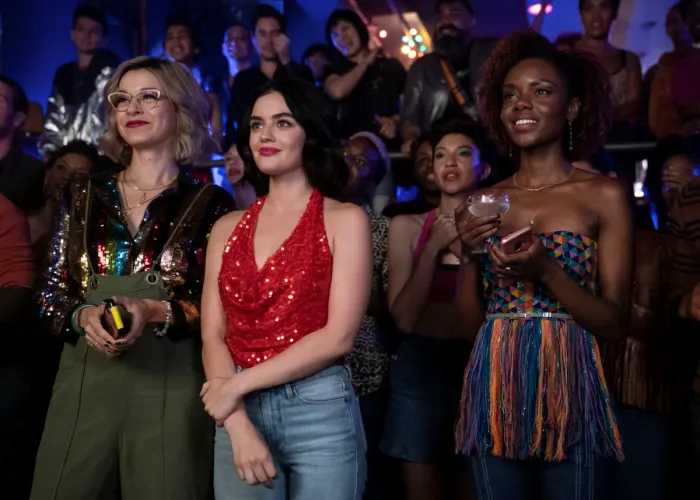 Katy introduces the Brit (maybe?) to Josie as "the most connected person in New York." Pepper is a quintessential New York hustler and habitual name-dropper — taking the mantle from Tahani Al Jamil since "The Good Place" concluded last week. "Pepper is purposely is an enigma," says Vastola. "She's a woman of all trades. She's just keeping it on the surface for everybody meeting her."

Pepper's wardrobe proves just as eclectic and unpredictable, but infused with lots of prints, textures and a high-low mélange of labels in the pilot: Dries van Noten, Rachel Comey, Marni, Ganni, Iro and Delpozo, with Zara and Forever 21 mixed in. While Pepper is on the forefront of the New York social scene, her sartorial references remain more than a few seasons off, to mesh with the overall timelessness of the show.

"We looked at street style from around the globe from three, four and five years ago," explains Rogien, who continued Pepper's mysterious vibe through her wardrobe. "She maybe picks pieces up from her travels because we don't really know where she came from. Maybe it's a clothing swap from a roommate situation. Maybe they're pieces stolen from her mentor."

Ginger in Katy Keene couture in the pilot.

Presumably, the third bedroom in the Washington Heights apartment has massive closets for Jorge, regularly hoofing on the Broadway chorus try-out circuit, and his drag alter-ego, Ginger Lopez. "I had to [create costumes for] two separate characters because there was so much going on for both storylines," says Rogien.

Vastola took inspiration from a Broadway production of "Rent," which she saw as a child, and Angel Dumott Schunard, specifically, for Jorge's especially good color-blocked vintage overalls worn to close out the premiere. "There was something about that look that aligned so nicely with the idea of bringing a comic book to the screen," she says.

As for Ginger, luckily roomie Katy is a resource for sparkly, bedazzled couture ensembles for her regular performances at the crew's local Molly's Crisis (possibly a reference to real-life piano bar and Diana's go-to, Marie's Crisis, on "Younger?"). For the pilot, Vastola slid into the DMs of New York drag community-based designers, including Pierretta Viktori for a pink leotard and green fringed outfit and Angel Ayala for a silver sequin gown (above). Her longtime draper, Jinfan Ha, built Ginger's big pink bow. 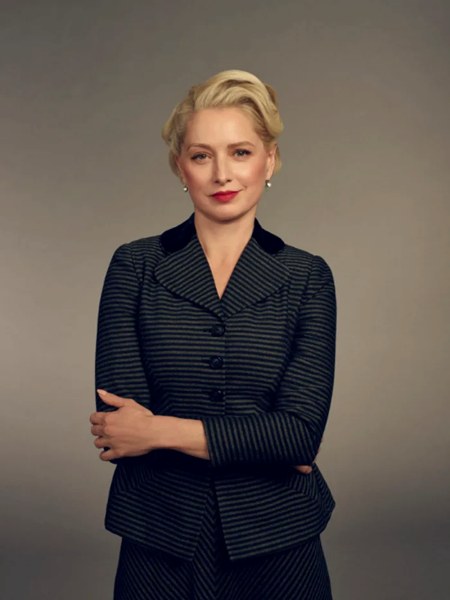 For her debut in the pilot, Gloria Grandbilt looks like she sauntered out of the Daniel Day Lewis film "Phantom Thread." Vastola dressed the "Gucci-wearing devil" in full vintage from New York's longstanding rental house Helen Uffner in Queens — kinda ironic, since Gloria presumably never ventures out of Manhattan. "She is 100% vintage [in the pilot], except for the Louboutins," the costume designer adds.

Overall, Rogien kept two very celebrated New York fashion figures in mind for the Lacy's doyenne. "Obviously the amazing Linda Fargo and the incomparable Anna Wintour were two of our touchstones," she explains. "More in terms of feeling, than specific costume or clothing pieces. But that level of fashion expertise is what we were referencing."

'Katy Keene' premieres on Thursday, Feb. 6 on The CW.